On June 5th, 10 members of the NAIST community (faculty, staff and students' families) participated in a tag rugby event held at the nearby Kitayamato Grounds by the Ikoma Junior Rugby Club. (IJRC) This event was organized by IJRC for the NAIST community to introduce tag rugby, a version of rugby where tags are used instead of the contact associated with traditional rugby, and to strengthen ties with the community. This event had been postponed twice due to coronavirus infection conditions and the weather, so participants were happy to finally get outside and meet new people while learning how to play tag rugby.

With over 50 participants from the club, 8 groups practiced the basic moves and learned the rules of tag rugby while getting to know each other. The children who participated were a little nervous at first, but soon relaxed and talked with the other children as they ran and passed the rugby ball around. After everyone understood the rules and warmed up, short games were held to put their knowledge and skill to the test. At the end of the event, IJRC donated a tag rugby set with balls, belts, tags, etc. so that the children and their families can play tag rugby, and the children immediately talked about attending tag rugby again while holding on to the rugby balls they received.

In 2021, NAIST concluded a cooperative agreement with Ikoma city and we are working with the Ikoma city hall and citizen groups to contribute to interaction and fellowship between the NAIST community and the surrounding community. NAIST would like to thank the IJRC for organizing this fun event for the NAIST community and for the tag rugby set, which will be made available on campus for anyone who would like to try playing tag rugby. 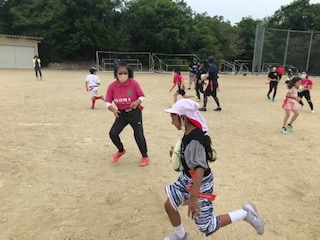 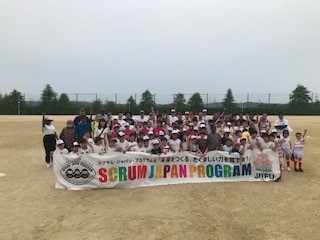