Repeated structure of axial skeleton is the most characteristic structure of vertebrate animals. It consists of a number of vertebrae and ribs, which are derived from somites, the repeated structure in the embryogenesis. Somites are generated by periodical segmentation, and this periodicity is controlled by a biological clock that counts 2 hours. In the posterior part of mouse embryo, where somites are sequentially generated, the expression of a specific group of genes oscillates in a 2-hour cycle, and recently it was revealed that this oscillatory gene expression works as the biological clock. However, the mechanism of its fine-tuning has remained to be elucidated.

Previously, they demonstrated that a negative feedback loop of Notch signaling via a transcription factor Hes7 is the central mechanism for generation of oscillatory gene expression. Notch signaling is one of cell-cell contact dependent molecular signaling that induces expression of the specific group genes. Each cell obtains extracellular information through Notch signaling. In this study, using genetic and pharmacological techniques, they altered the activity of Notch signaling in mouse development, and showed that the period of oscillatory gene expression is sensitive to Notch activity. Normally, oscillation period is approximately 120 minutes. In their experiments, enhanced Notch activity extended it by several minutes, whereas diminished Notch activity shortened it by several minutes. They also established mathematical model based on the negative feedback loop of Notch signaling and carried out computer simulation. The results were completely same as the results of the experiments and supported them. Thus, the combination of experimental and mathematical techniques revealed the mechanism for fine-tuning of the biological clock that controls animal development. 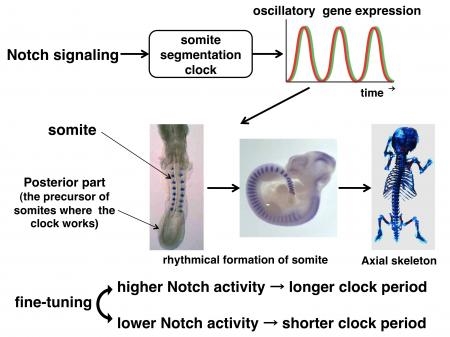