Developent and evaluation of OpenFlow/SDN based network system applicable for such a large scale disaster. -for an experimentation on the latest NEXCO-WEST traffic control system-

At the Graduate School of Information Science of the Nara Institute of Science and Technology, a group headed by Professor Kazutoshi Fujikawa, Associate Professor Atsuo Inomata and Assistant Professor Kenji Ohira at Internet architecture laboratory (INET-Lab) has supported a demonstrate experiment with West Nippon Expressway Company Ltd (NEXCO-West) for a brand new traffic control system based on the newest network control architecture which is able to backup system for an emergency such a large scale disaster. As a result, we indicated that this network technology would be become next future standardization.
This technology is OpenFlow/SDN, now it is focused as the architecture that is able to control wide variety of network devices nevertheless specifications. However it is needed still firm verifications of interoperability for incompatible devices.
NEXCO-West has developed and constructed a world's first system that is able to subrogate important functions in very short time when the main traffic control system would be suspended due to a large disaster.
In our cooperated experiment, we setup and configured over 100 OpenFlow switches on real NEXCO-West wide area network topology. Also we developed an experimental OpenFlow based network device and then connected this to NEXCO-West system. Furthermore, we evaluated times in automated configuration, a load of each switches and a configuration of data transmission whether whole of system is worked with our intention.
Consequently, we indicated a high possibility for speedy routing or recovering on a large-scale network constructed many OpenFlow switches to future novel traffic control system. Also it gave a big expertise for future standardization on Intelligent Transportation System. 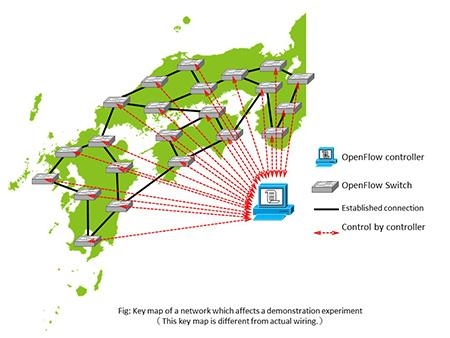